Hi!  Long time no see, huh?  Well, I guess if I’m being honest that’s not technically true.  Every time I walk into the family room I can feel you glaring at me, but I haven’t risked a glance in your direction because I feel guilty about how we left things.  I know I promised we’d hook up again after the holiday season was over to work off all the Christmas cookies I ate, and I feel really bad for leaving you hanging for so long.  I’m sure you must resent how I’ve treated you, but it’s not like I planned to use you as a clothes hanger.  I thought that if I hid you beneath a mound of laundry, I wouldn’t be reminded that the remedy for my ever-expanding ass was right under my nose.  You’ve heard the saying “ignorance is bliss”, right?  Well, denial is even more so…. until you can’t zipper your jeans, then all bliss is lost.

Do you remember when I first brought you home a few years ago?  I was SO excited and I promised you that we’d hang out everyday.  How naïve was that?!  I should have known that you and I are too different to make a long-term relationship work.  You’re always on the move, and sometimes I just need to spend a little downtime with the other furnishings in the house – like Couch.  I hope I don’t make you jealous by saying this, but Couch understands me in a way you never could.  He is always so comforting and supportive, and doesn’t judge me for watching eight-hour House marathons on TBS.

Please don’t blame yourself for us not working out- it’s not you, it’s me.  I’m the one who made promises I couldn’t possibly keep and pretended to be someone I’m not.  But you have remained true to who you are from day one.  How do you keep on such a steady, straight course and never waiver?  I wish I could be more like you.  I’m really trying to turn over a new leaf… I know you’ve heard that one before, but I mean it this time.

I’d understand if you didn’t want to give me a second chance… well, it’s more like a fifth or sixth chance, I guess.  But if you’ll indulge me one last time I promise you won’t regret it.   I’ll meet you in the family room, sneakers laced and ready to run!  Whoo-hoo!!

Can’t wait to feel the burn,

Today didn’t work out exactly the way I planned.  I apologize for being late for the big reunion, but it took me fifteen minutes just to find my damn sneakers.  I should have thought to look in the back of my closet because I put all my useless crap back there.  Once I found them, I thought I was ready to rock and roll, but I hadn’t taken into account that you would need some prep time too.  I know it’s been awhile but damn girl, you have definitely seen better days.   It took ten minutes to clean off all the dust that had accumulated over the last six months.  If I hadn’t, I knew there wasn’t enough Benedryl in the entire state of New York that would have saved me from the resulting allergy attack.

After wasting almost a half hour, my motivation was nearly non-existent and all I wanted to do was take a nap.  I knew it would be hard to start exercising again after all those months of hanging out with Couch, but I didn’t anticipate my feelings of frustration, self-loathing, and hatred towards you to be quite so overwhelming.  Sorry I called you an electronic piece of shit – I didn’t mean it.  It was said in a moment of agony because I felt like my guts were being forcefully yanked out of my belly button. If it makes you feel any better, the names I call Scale are WAY worse.  But in the future, I’ll try to direct my anger where it belongs – on the pint of Ben & Jerry’s ice cream in the freezer.  If it weren’t for those tasty bastards, I probably wouldn’t be in this mess.

Clearly whoever coined the phrase “it gets better with time” wasn’t talking about a fat girl on a treadmill.  Our meeting today sucked just as much as yesterday.  My stamina wasn’t half what it was six months ago.  I can’t believe I ran a 5K race in November and another one at the beginning of December!  I must have been on drugs… or delusional… or on drugs that caused delusions.  If it weren’t for the finish line pictures, I would’ve thought I hallucinated the whole thing…. 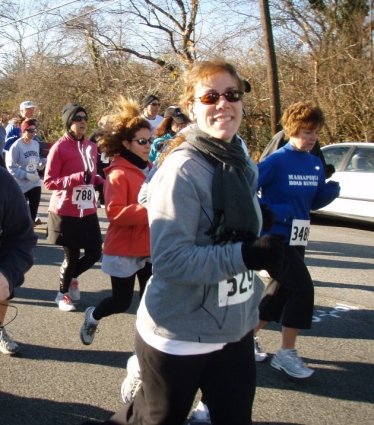 Can you tell which one was my first race?  I thought I was going to need a paramedic and defibrillator paddles when I crossed the finish line the first time.  It amazes me what a difference a month makes – look how happy I was to torture myself the second time!

Now six months later, I’m starting from ground zero again.  I had no delusions of grandeur this time around.  I was only going to walk with you – NO running allowed…. except when the Black Eyed Peas sing “Pump It” because despite my pathetic condition, I can’t help but run to that song (although my lungs did threaten to boycott my body if I didn’t stop).  But even at a slower pace I still felt out of breath, and at the 2.5 mile mark one of the toes on my left foot felt like an overfilled water balloon about to burst – seemed like a good excuse to stop.  I’m sure you wouldn’t have appreciated toe juice splattered all over you.

Oh, while we’re on the subject of things we don’t appreciate, let me say that I don’t appreciate you creaking and groaning the way you’ve been doing the last couple of days.  I already know I’m fifteen pounds heavier than I was the last time we got together, so I don’t need you reminding me of that fact every time I take a step.  I just joined up with Weight Watchers again, so quit your bitching or I’ll trade you in for a Bowflex Treadclimber – they claim to burn over three and a half times the amount of calories you do… not a threat… just food for thought.

Fuck the burn…. I need a brownie,

P.S. –  Here’s a visual diary of our progress this week.  As you can see by the pictures, we walked 2.5 miles each day but the finish times vary.  I’m trying to take solace in the fact that we got a little bit faster everyday, and ignore the voice in my head that reminds me that I managed to finish a 5K (3.1 miles) in 35 minutes not too long ago…. 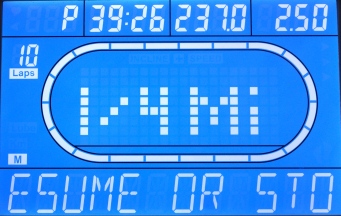 192 thoughts on “Letters to My Treadmill”