Every once in a while, a blog idea comes to me while I’m commenting on another person’s blog.  The inspiration behind Sexting With Grandma is compliments of the incomparable Madame Weebles who wrote a blog post about some of the twisted thoughts that run through her head sometimes.  After reading her post, I told her that I sometimes think about sending my friends and family members wildly inappropriate text messages just to see how they would react; something along the lines of….

“You were incredible last night, Rafael! I never knew it could be like that!  I love how adventurous you are… and that goes double for your dog, Sir Humps-a-lot.  What do you say I ditch my husband again tonight and find out if we can come up with any more uses for that vibrating chicken of yours?”

I loved the idea too much to let it end with Madame Weebles comment section, so I decided to actually send this exact message out to several people I know.  I was both eager and anxious to find out what their reactions were going to be. I was pretty sure they would all take it in good fun, but since I had never really tested the kinky boundaries of my friends and family members before (because… EWWW), I wasn’t positive that they wouldn’t disown me afterwards.  But if Rafael can be adventurous, then so can I!!

Initially, I really wanted to send the text out to my mom.  But my mom’s innocence was protected by the fact that her cellphone doesn’t receive text messages… I know, right?!  But she’s firmly planted on the “people should pick up the phone and TALK” side of the communication debate, so there’s no convincing her of all the merits of texting – like being able to send texts involving vibrating chickens, for instance.

The next victim on my texting hit list was my sister.  So, I sent it out and waited…. as it turned out, I didn’t have to wait long for her reaction.  A couple of minutes after sending her the text, my home phone rang.  I tried to answer with an innocent sounding “Hello?”, but couldn’t quite pull it off because I was giggling too much.  She said something along the lines of, “I just got a pretty interesting text from you….”  I couldn’t keep a straight face, so my ruse was quickly ruined.  Didn’t she know that when she gets a sext from her sister, she’s supposed to sext back?  Seemed like common sense to me.

I toyed around with sending the text to my older brother, but for some reason the idea grossed me out more than sending it to my mom.  So, it was on to victimizing my friends.  I sent the text to six of them, and then pretended that it had been a mistake that they got the message from me.   I will share with you my top three favorite responses.   [*Side note: All of my responses are in blue, and my friends are all in grey].

Number Three came from my friend, Jenn…. who apparently takes me WAY too seriously, and also thinks that me having an affair with a guy, his dog, and his chicken is a totally plausible idea:

Then I waited about twenty minutes for another reaction out of her, but when nothing came, I started to get nervous that she was taking me seriously.  So, I texted her back, and filled her in on the gag: 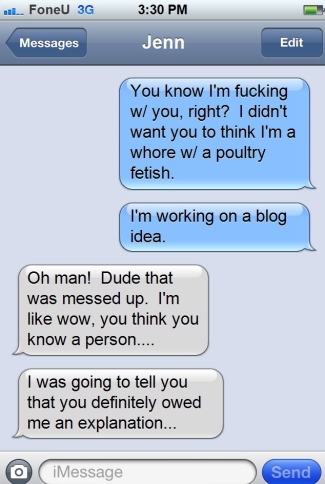 Number Two came from my friend, Buck.  I’ve known him since college but apparently, he doesn’t think enough of our friendship to put me into his contact list, so when he got this text message, my name didn’t come up with it.  He thought he was getting this crazy text from a complete stranger: 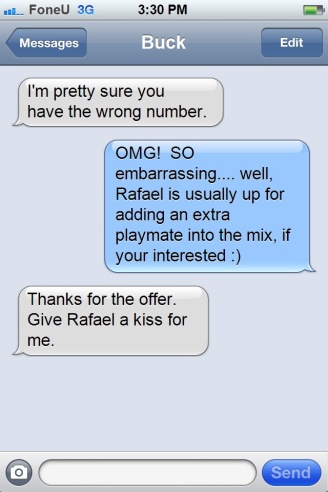 Again, nothing but radio silence for a solid twenty minutes, which got my paranoia working overtime again.  At that point, I didn’t know that he wasn’t aware the text was from me.  So, I texted him back to make sure he knew it was just a joke: 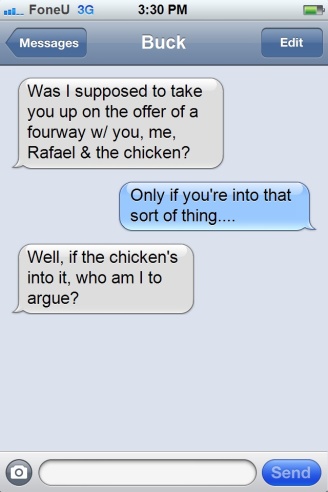 Then much to my surprise, Buck’s wife, Colleen decided she wanted to jump in on the act.  I thought her attempt to shield her husband from a sex-crazed poultry slut and her lover was kind of sweet.  Who says chivalry is dead?:

Number One came to me from one of my oldest friends, Moe.  I’ve known her since high school, and her response is the perfect example of why we have stayed friends for the last twenty-five years.  I love you, my twisted sister:

Have any of you ever pulled a texting prank on someone you know?  If so, I’d love to hear about it.  And if not, what are you waiting for?  It’s a fun way to pass the time while you’re waiting in line at the grocery store or during those annoying commercial breaks on TV.  If you have the guts to send out this text or something like it, and tell me the reaction you get, I’ll pledge my undying love and loyalty to you.  I might even throw in a vibrating chicken.

[*Disclaimer:  Get Write Down To It takes no responsibility or liability for any divorce, disownment or involuntary psychiatric commitments that may result while performing this texting prank with your friends and family members…. mostly because I’m too broke to afford a lawyer.  So, proceed at your own risk.]

51 thoughts on “Sexting With Grandma”