I’ve recently been experiencing some stomach and gastrointestinal problems. Don’t worry, this post won’t degenerate into an in-depth discussion about my guts – because EWWW!!  Therefore, in the interest of sparing you the gory details, I’ll just fast forward through the last nine months of my life. It went something like this:  blah blah a bunch of doctors appointments…. blah blah annoying tests…. blah blah embarrassing ass-exposing hospital gowns…. blah blah a lot of results I needed a medical jargon to English dictionary to help decipher.

That pretty much brings us up to date.   End result after ALL that? I was told that I have stomach inflammation and I could no longer take Advil (or any similar pain relievers) because it would make the problem worse.  Normally, staying away from over-the-counter medication is not a big deal. I’ve never been a pill popper, but this piece of news happened to coincide with that time of the month. Yes boys, for the remainder of this post, you might want to pretend to stare at that Ficus tree over there in the corner, because I’m going to talk about my uterus. I promise I’ll try to make it brief…. 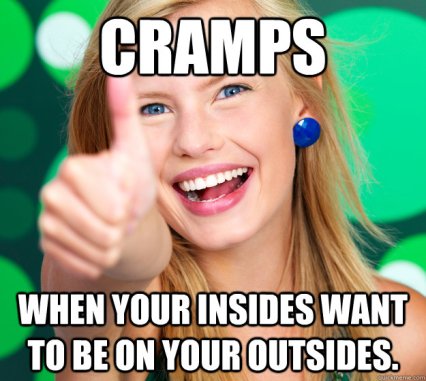 For some girls, their monthly visit comes and goes without much disturbance (*if you’re one of these girls you should know that I HATE YOU.  A LOT). But for me, it feels like two porcupines are sumo wrestling around in my lady parts. Usually, Advil is my BFF during those few days, but now I needed to find something else to help anesthetize the porcupines – so, my doctor introduced me to Tylenol. I had never taken it before, but I felt confident that my new friend would help me through the rough patch, and not give me a stomach ulcer in the process.

HERE I COME TO SAVE THE DAY!!!

By all appearances, Tylenol was a total badass – bright red box, the words “EXTRA STRENGTH” emblazoned across the front in big letters, and a promise that it would help relieve my pain. We had just met, but I loved Tylenol already. So, I popped two caplets, curled up with my heating pad, and waited to feel anything less than totally fucking miserable.

I waited…. and waited…. and waited. After three hours and no relief, I came to the sad realization that the only thing “extra strength” about Tylenol were its empty promises and boldface lies. Apparently, acetaminophen is medical-speak for “tiny caplet o’ useless crap”.

When I took the second dose, I think I heard my uterus laugh. Actually, it was more of a cackle – the kind you hear from the villain in a movie right before they kill someone. I couldn’t really blame her for going insane. I had the means of curing her ails right in my medicine cabinet, but was opting to take extra strength placebos instead. 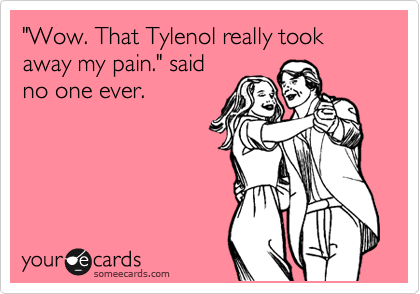 After another THIRTY-SIX HOURS of sumo wrestling porcupines, I was faced with a clear choice: I could either keep taking this pathetic excuse for a pain reliever OR set fire to the little red box of lies and start shooting heroin. I thought that since heroin went directly into my veins, it wouldn’t cause any stomach irritation – I’m nothing if not practical.

Granted, heroin may come with a handful of other pesky side effects (including, but not limited to): crippling addiction, face pustules, rotting teeth, itchiness, muscle weakness, depression, and cold sweats. But have you ever heard of a heroin addict complaining about menstrual cramps? Nope! They probably don’t even notice when their period comes because they’re too busy scratching their face pustules.

So months from now, if you see me lying in the gutter with a gaping maw where my teeth used to be, probably covered in a variety of my own bodily fluids, don’t feel bad for me. I’m at peace in a world without porcupines. 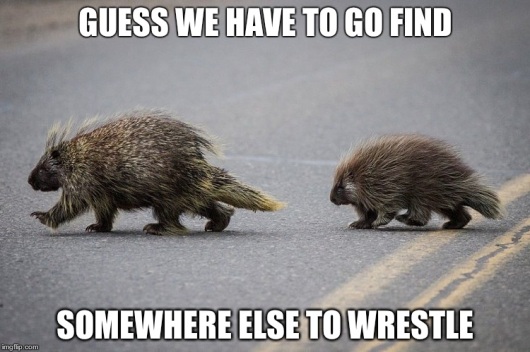