I don’t remember much about the hours I spent in the hospital the day I had my gallbladder removed – probably because they were handing out narcotics like Halloween candy.  But I vaguely recall being asked to strip naked and put on a hideous hospital gown that did little to protect my ass or my dignity.  It seemed no matter how much I fussed with the ties, some R-rated body part was always exposed.

But after the operation I felt like my guts were on fire, and I no longer cared if my ass was hanging out the back of my gown.  I only cared whether or not the onlookers had any painkillers.  I felt I was entitled to a little pharmaceutical relief since people had been stabbing me with sharp, metal objects for the last hour.  So, when a nurse offered me pain medication, I made it clear to her that I was more than willing to swallow, inject, snort, or smoke any drug she was willing to throw at me.  In fact, I would have opted for a week-long drug coma rather than going home that day to face what would surely be an unpleasant recovery process.

As I would soon find out, unpleasant wouldn’t come close to describing the week that followed.  I was led to believe by several people who had gone through the surgery, that it was no big deal.  They assured me I would be back up and running after a couple of days.

As I laid there in agony, I felt like I had been duped – sort of like when I wanted to start a family, and all the parents I knew told me how great it was to have a baby.  Then I had one of my own, and realized they just wanted me to be as miserable as they were.  But I’m going to give it to you straight, readers.  This way, if you have to have your gallbladder removed, you’ll know exactly what to expect during your first week of recovery.

Spoiler alert – it ain’t all rainbows and kittens people….

Day One – Please kill me now:  I have about as much chance of making it upstairs to my bedroom as I do of climbing Mt. Everest, so I set up camp on the couch.  I quickly discover that my bladder is public enemy number one because it’s the only thing that forces me to move off my makeshift bed.  During the painful, excruciatingly slow shuffle to the bathroom, I debate the pros and cons of adult diapers.  I decide against them because I don’t think I can convince my husband to change a diaper filled with pee that (for some mysterious reason) smells like a revolting mixture of asparagus and nursing homes.

I spend most of my time alternating between writhing in pain, sleeping fitfully, and eating saltine crackers.  I try eating chicken soup (I hear it’s good for the surgical patient’s soul), but after the first bite, my stomach is quick to remind me that I just had one of my organs yanked out through my belly button today – looks like nothing more than saltines and flat ginger ale will be tolerated.  In the meantime, my living room clock and I are in a stubborn battle of wills – it bets me that I can’t last the whole four hours between my doses of percocet.  Bastard wins every time.

Day Two – I think the cats want to eat me:  My husband returns to work, and my kids go off to school.  I’m left home alone with my two cats.  They appear concerned for my well being, standing like two furry sentries on the couch.  But in my weakened condition, I sense that their primal feline instincts are starting to kick in – they know an easy kill when they see one.  If my husband doesn’t get home soon, I fear they will take me down like the wounded impala of the herd.  I wonder if my life insurance policy covers being eaten by house cats.

Day Three – So NOT back up and running:  Screw running, I can’t even put on my own socks without my husband’s help.  The pain is slightly more bearable, but I’m still taking pain medication at fairly regular intervals because they’re the only thing that prevents me from screaming and cursing whenever I want to venture off the couch.  I keep waiting for the “percocet vacation” everyone told me I’d enjoy, because right now all the percocets are doing are making me constipated.  How long can a person go without pooping before they go into septic shock?  I take Milk of Magnesia because I’d rather not find out – pretty shitty “vacation”, if you ask me. 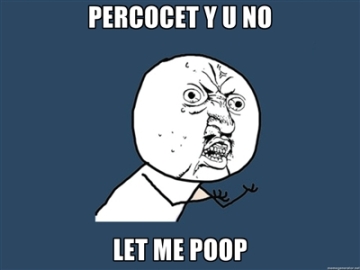 Day Four – This isn’t what I meant by running:  The good news is that the Milk of Magnesia worked.  The bad news is that it worked a little too well.  After the fourth or fifth trip to the bathroom in less than an hour, I start to feel nostalgic about being constipated.  I realize that my doctor (who recommended the M.O.M.) is a sadistic asshole for giving me diarrhea when I can barely walk.  I take some Imodium A-D in the hopes that it will counteract the Milk of Magnesia.  But if my experiment doesn’t succeed in tipping the intestinal scales in the other direction, I’ve decided to let my cats eat me.

Day Five – Weapons of mass affection:  You know that instinct you have to comfort your kids when they get sick?  As it turns out, kids have the same instinct – we just don’t get to see it that often because they’re usually too busy annoying the hell out of us.  But as I lay helpless on the couch for four straight days, I watched my kids’ nurturing side emerge.

As sweet as it is for them to want to comfort me, having them within a 10-foot radius terrifies me – especially my 8-year old son, Aidan.  He’s usually about as gentle as a bulldozer, and I know that even an uncharacteristically cautious hug will produce more pain than my percocets can handle.  So, he discovered a comforting compromise – the head hug.  It has all the heartfelt affection of a regular hug, coupled with the asphyxiating effects of a sleeper hold.  I’m pretty sure this is where the phrase, “I love you to death” originated.

Day Six – Jesus hates me, this I know for Bruce Springsteen told me so:  We bought tickets to see Bruce Springsteen in concert before my surgery was scheduled, but we decided to keep the tickets afterwards because I thought I’d be back up and running in a couple of days – remember the lies?  I think I can cope with the pain because all I have to do is get to my concert seat, sit down, and enjoy the music.  Wrong.  There’s a rain delay (outdoor stadium), and because there’s a threat of lightning, they won’t let us wait in our seats.  So, I decide to find a patch of concrete somewhere in the sheltered recesses of Metlife Stadium, and sit down to sulk.

I’m fairly claustrophobic, so I’m less than thrilled about being crammed into a concrete box with thousands of other people.  After surveying my options, I’m happy to find a spot slightly separated from the soggy masses – at least until a total stranger decides to join me.  If it isn’t bad enough that this guy is playing a disturbing game of personal space invaders, I’m also pretty sure he has leprosy.  At first glance, I thought he was wearing a long-sleeved shirt, but upon closer inspection (which I couldn’t help since the guy is sitting right next to me) I see the stuff covering his arms aren’t sleeves.

I know I should feel bad for the guy, but it’s difficult to be compassionate when I’m wet, in pain, and now getting flaked on every time he scratches his scaly arm.  I don’t buy into religion much, but it’s hard not to feel like God is testing me a bit:  TWO HOURS of pouring rain with no rescue ark in sight, and now there are lepers.  What’s next, a plague of locusts?  It’s official, Jesus hates me.

Jesus: Linda, you’re supposed to love all God’s children.
Me: Yeah, but you make it hard when you flake on me like that.
Jesus: Duh, that’s why it’s called a TEST.
Me: Couldn’t you have come back as Ryan Gosling instead?

Day Seven – Sign, sealed, delivered, I’m cured:  Jesus may hate me but there are plenty of people around who still love me, despite my inability to tolerate people with gross diseases.  During the course of my recovery, there was an outpouring of support and concern from my friends and family:  emails, texts, cards, and phone calls came in daily to check on my progress.  It’s impossible to thank everyone individually – mostly because I was too drugged up this week to remember what happened.  So, I’ll throw out a blanket, “I LOVE YOU!!” to all of you who cared enough to check in on me and make sure I wasn’t dead.  I’ll also make a few honorable mentions….

1.  Moe, one of my best friends since the 10th grade sent me flowers with a card that read:

Here is the text I sent in reply:

“Bitch, don’t you know it’s mean to make someone laugh after they’ve had a holes cut into their guts?  Thanks for the flowers though.  Love ya!” 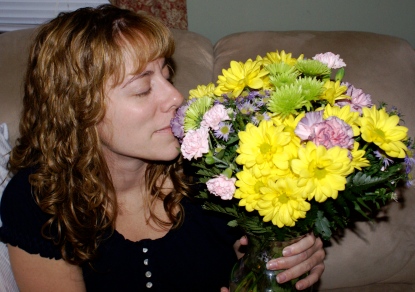 2.  My mother and father in-law sent me cupcakes in the mail.  CUPCAKES!!!   Despite my mother in-law’s mistrust and confusion surrounding the internet, she managed to successfully secure and ship me a dozen of these tasty treats.  Had I known there was the possibility of cupcakes being involved, I would have had my gallbladder out years ago!!  Maybe I’ll go for my appendix next year. 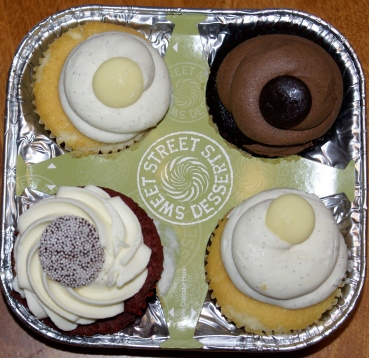 3.  Last, but certainly not least, is my wonderful husband, Kevin.  This week, he was Florence Nightingale and Mr. Mom all rolled into one.  Had he not been there to help me sit-up, take showers, and put on clean clothes, I would probably still be lying on the couch in a pile of my own stink.